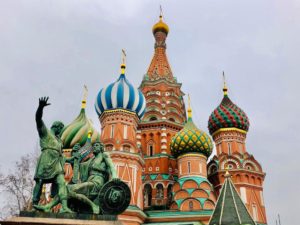 Situated at Red Square, Moscow, this cathedral is often showcased as the symbol of Russian heritage. Here goes a few facts about the same.

>The first Tsar of Russia, Ivan Vasilyevich—also known as Ivan Grozny (Ivan the terrible).In the 1550s, his armies defeated the independent Tatar khanates of Kazan and Astrakahn, and the church was built in honor of those victories.

>Stories and myths abound of Ivan’s raging temper, one of which involves him purposefully blinding the cathedral’s (unnamed) Italian architect so that its design could never be replicated.

>Born in 1468, Basil (also called the Blessed, the Beatific, and the Wonderworker of Moscow) was the son of commoners and was trained to be a cobbler.

>The cathedral’s original color was said to be white to match the white stone of the Kremlin, while the domes were gold. Starting in the 17th century, the façade and domes began to be painted in the remarkable colors that are seen today, and the pigment is said to be taken from a Biblical description, in the Book of Revelation, of the Kingdom of Heaven

>Confiscated by the state after the Bolshevik Revolution, Saint Basil’s has been a museum and tourist attraction since 1929.In 1990, the Kremlin and Red Square were named a World Heritage Site by the United Nations Educational, Scientific, and Cultural Organization.

Subscribe to our email newsletter for a weekly look at the top stories in travel, design and photography.